October has been such a crazy month for me. I have not had much time to try the tasty recipes posted but I have been taking notes for a later date (like the scones for Christmas brunch). When I saw this week's recipe I had to make them since I am on a pumpkin kick. Luckily, I had some pumpkin left over after making some pumpkin chocolate chip cookies. 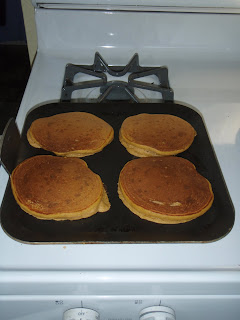 They were a little dense, however I expected this knowing how the cookies baked up. These pancakes were so tasty that the hubs went back for more (we do have enough for breakfast tomorrow, yay!). I liked the seasoning for these pancakes that I used the same amounts in the second batch of cookies I made. The house smelled so good after cooking, reminding me of the holidays. Definitely a keeper!
Posted by Erika at 4:36 PM