Better late then never... twist on the pita burgers

I’ve been a bad blogger and cook. Work has kept me so busy that by the time I get home I don’t really feel like cooking. I’ve been making big things, like chili, that last a while so I don’t have to cook as often. I’ve been reading the delicious things that have been posted and have been itching to try them. The pita burgers from a few weeks ago really caught my attention. I did a few tweaks because I didn’t have everything that was needed but it all seemed to come out really well.
The biggest substitutions I  used sliced skirt steak instead of ground beef and greek yogurt for the sauce instead of mayo. I’m not a big fan of mayo.
I prepped the sauce first since I wanted it to marinate the flavors while I prepared everything else. 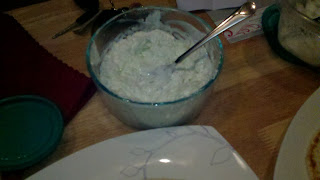 Since the steak was sliced so thin I baked it in my convection oven so it would still be juicy along with some paprika and spices. 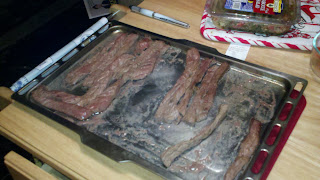 Diced some onions, tomatoes and lettuce I had lying around. Creating what ultimately became more of a gyro then burger. As soon as the steak was finished cooking I swiftly assembled them added some fresh Tabouleh salad. Viola a really quick dinner that was inspired by the pita burger post. 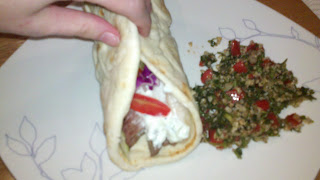 I think I'm going to continuing playing catch up with the Thai lettuce wraps next. I have a lot of cooking to do. :)
Posted by Eva at 1:22 PM

Email ThisBlogThis!Share to TwitterShare to FacebookShare to Pinterest
Labels: pitas