A Plethora of Updates

I haven't been on here in awhile...so I have lots of recipes to update. The last three weeks, in fact.
Last weekend I went to Boston to visit a friend and we decided to make the lettuce wraps for dinner one night. We used ground turkey breast rather than pork and were worried about it being too spicy, so we used a sweet chili sauce instead. The result was rather lime-y and not overly thai-tasting. It was alright for a light dinner, but probably not something I would try again. The wine was excellent though. 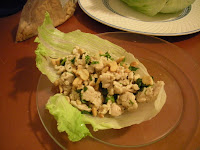 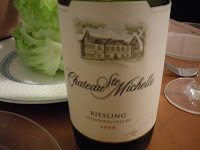 Then today was a kitchen day! Ed went off to golf for the day and I got the house to myself, so I did some laundry and then played in the kitchen. The same friend from Boston came up tonight and we got to enjoy all of the goodies.
First I made the chocolate hazelnut thumbprint cookies. Let me just say...OH MY GOODNESS! Anything that gets me to buy Nutella is a good recipe for me, but these were divine. I used dark chocolate powder rather than the unsweetened cocoa powder, and I didn't have parchment paper or wax paper, but everything worked out fine. The batter itself was to die for (and yes, I ate it raw eggs and all...I figure with the recent egg scare the eggs are probably safer than usual right now...), and the finished cookies were awesome! 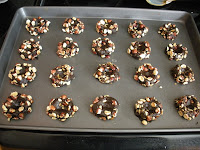 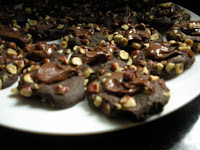 And then finally, I made the pizza pot pie. I didn't measure anything for this recipe, but I used a lot less of everything than the recipe called for. I used fat free ricotta, two egg whites rather than the egg (saved from the cookies, since they only used yolks), low fat mozzarella, chicken sausage and whole wheat pizza crust. I thought it came out fairly well, though if I were to make it again, I think I would put a bottom crust on too for just a little more chewy factor. However, it was a tasty, easy meal that would be great to bring to a potluck sometime...and was an excellent pre-out-to-the-local-bar dinner for my friend and me! 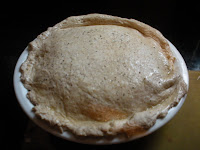 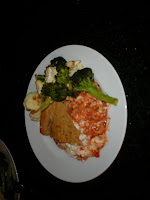 Posted by blenderdance at 4:29 PM