I can't believe it took me this long to finally make a recipe that was posted for the week. I have to say it wasn't what I was expecting, but it was still pretty good. Unfortunately, the hubs didn't give it the approval I was hoping for, so it will go in the recipe book for a variation some day.
I didn't want to buy a whole bottle of Sriracha chile sauce for the little amount it called for, so I substituted some Frank's Red Hot and cayenne pepper. I also added the seeds of the jalapeno, but it still wasn't super spicy like I was hoping for. 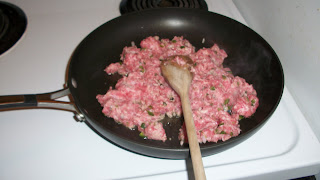 Here's the meat in all of its glory, cooking away. We did cut the recipe in half, especially since it was just the 2 of us, and it was a new recipe. 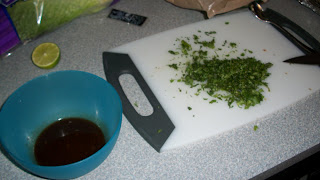 Thankfully, my boss had just brought in a ton of fresh herbs from her garden, so I had plenty on hand without having to hit the grocery store for some.

The best part of the night...I asked the hubs to get the lettuce ready for dinner. This is what I turned around to. 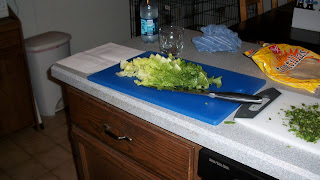 Ummm yeah. That's not really what I meant. Needless to say, we busted out the burrito wrappers and ate it that way. I added a little bit more of the Frank's Red Hot on top, and it was delish. I think he secretly intended on eating it that way to begin with. He heard me say lettuce wraps and his eyebrows went up in that "I'm thinking no" kind of way.

Now it's time to head off and eat my much deserved bowl of ice cream after a long week of running and spinning class.