This week's recipe is actually very similar to a dish Victor often makes, kebab & naan. But, he left me to my challenge and I got to do it my way.

I tried a trick for juicy meatballs from Michael Smith's spaghetti & meatball recipe from Chef at Home: I started with some bread crumbs (crumbled from one end slice of a whole wheat loaf) and added some milk. Victor usually doesn't do this step but I've been curious whether it really works. (I'll answer this question later.) Then I added all the seasoning (not really sure how much... but I think it was a LOT) and stirred in the beef. I also added an egg to help bind it all together. 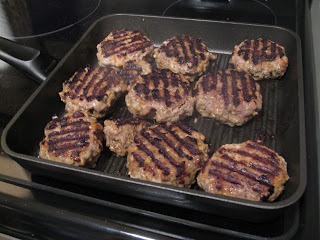 In the meantime, Victor made his usual naan. It's just a simple white bread recipe, rolled out into flat pieces and grilled until it puffs up. He uses the pasta roller attachment on our KitchenAid mixer. 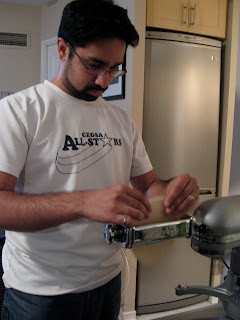 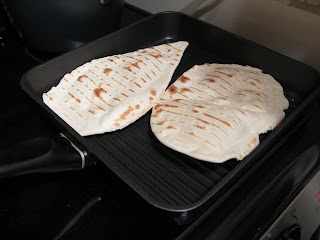 I made sort of a taco sandwich with the naan and served it with microwave steamed corn on the cob. 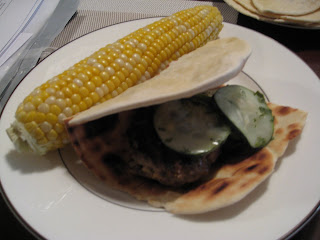 The mint in the cucumber salad totally made this dish for me. Between this and the Week 2 recipe, I've really developed an appreciation for fresh mint in cooking. I let the cucumber salad sit for so long that the cucumbers turned into pickles in the dressing. But that made it more awesome. Oh, I also used Miracle Whip in place of mayonnaise and added some lime juice.

I have to say - cucumbers aren't my favourite, but they were perfect with these burgers. And I'm not a big fan of foods in sandwich form, but with the thin naan, these sandwiches had a more than acceptable bread : stuff ratio.

I'm not sure how much seasoning I used but I'm pretty sure it was at least twice as much as the recipe called for. We like our meat well seasoned. Since I didn't measure, I felt that I made it a little unbalanced (too much cumin maybe), but Victor thought it was perfect. To each his own!

And the bread crumbs & milk trick? AMAZING. These were the juiciest burgers I've had in a long time.

Hooray for leftovers for lunch!
Posted by Adriane at 7:35 PM