I finally got around to this week's meal on Wednesday night. My brother-in-law and his girlfriend came over for dinner, so I decided that I would make the chicken for them! I thought the stuffing was pretty easy to make. I didn't really measure anything, just threw in the different ingredients and cooked until the wine was mostly cooked out and then added the cheese. Stuffing the chicken was harder than I thought it was going to be...but it probably would have helped if I had toothpicks rather than having to cut down wooden skewers which really weren't cooperating in the process. The stuffing was also a little oily from the oil the sundried tomatoes were in, but it wasn't noticeable once the chicken breasts were cooked.

I served the chicken with corn on the cob and corn chips with guacamole that my brother-in-law's girlfriend made...and of course, the rest of the wine! It was an odd little combination, but everything was tasty! 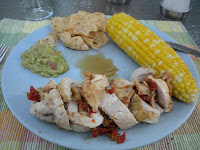 The best part was that I ended up with an extra breast to take for lunch the next day! Yum!

Posted by blenderdance at 4:09 AM